In April of 1915, Roy wrote to his father from Edmonton explaining his reasons for wanting "to go to war" and seeking his approval and advice.
Already an Officer Cadet in the Army Officer's Training Corps, Roy was fascinated by the new technology of flight.
When Roy returned to Carleton Place, an officer of the Royal Naval Air Service was in thbe area, recruiting young men for that branch. Brown, and his childhood friends Stearne Edwards, Murray Galbraith and Walter Sussan decided to join together.
At this time the R.N.A.S. was only accepting men who already had a private piolt's license. The four applied, at their own expense, to enter the Wright School of Aeronautics at Dayton, Ohio.

During training, the aircraft would go up for a few minutes with an instructor and one student, then land. A brief discussion of the flight would take place with all the students grouped around the plane. Instruction was carried out in this manner on the ground, as little conversation could happen in the air with the roar of the engine immediately behind the seats.


The final test for a license consisted of three solo flights totaling 40 minutes and two figure eights. If one could take the machine into the air, fly around the field and land without killing oneself or destroying the aircraft, he was considered to have "passed" and to be a pilot. 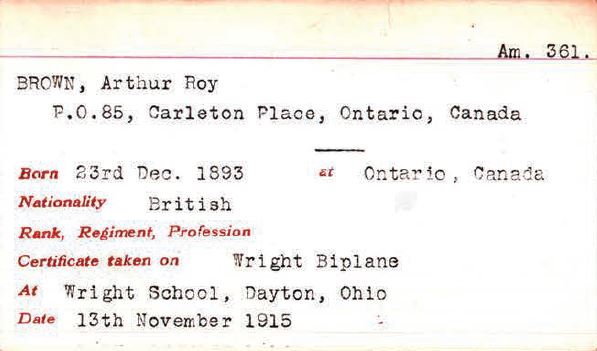 Armed with their certificates, Brown, Edwards and Galbraith approached the Royal navy Air Service, and were signed on and enlisted. Brown and galbraith sailed for England on November 22, 1915 on the American Line ship "The Finland". In the future, when learning of the numbers of young men from town who served with the British Aerial Services, some editorials of the period dubbed Carleton Place "A Nursery of the Air Force" .

Total costs at the school exceeded $600, quite a sum of money at the time. Students slept in the hangers, and meals were provided by local farmers.