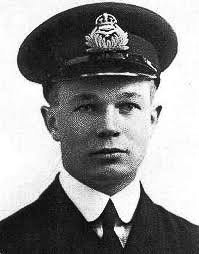 Roy Brown arrived in England and joined Stearne Edwards at the training establishment at Chingford, England. There he trained on Maurice Farmens, Avros, and BE2c’s, learning military flying and bomb dropping.


In March 1917, Brown was posted to No. 9 Naval Squadron, flying coastal patrols off the Belgian coast in Sopwith Pups. His squadron’s chief task was the defense of the North Sea fleet. Brown was then posted to “B” Flight No. 11 Naval Squadron, primarily a training squadron. Here he flew a variety of Sopwith aircraft at the Frontier Aerodrome near Ostend on the Belgian frontier, just as the Germans were stepping up their observations in the area and greatly increasing the number of dogfights. The Royal Flying Corps was bleeding men and machines so the Royal Navy Air Service stepped up their combat activity from coastal patrols to air fighting over France.

Brown opened his aerial score on July 17, 1917, bringing down a German Albatross DIII while flying on patrol south-east of Nieuport. The No. 11 Squadron was disbanded in mid-August, and Brown returned to No. 9, equipped with the Sopwith Camel. He scored his 5th victory on October 13, 1917 to become an ace.

Brown and his longtime friend Stearne Edwards came home to Canada on Leave from November 1917 until January 29, 1918. On December 17, the flying aces left Carleton Place for Washington, D.C. with their flying clothes in their baggage. Returning to Carleton Place at the end of the week, neither said anything about the mysterious trip, but that it was a military secret…

Brown returned to England and in February he was made a flight leader. A confidential report stated that he was.....”a very good flight leader and fearless pilot, with good ability to command.” compassionate and honourable man”, Brown was known for circling outside of engagements after leading the initial attacks, so he could come to the aid of those in trouble. Like many WWI pilots, he preferred to think he was killing the machines, not the men. He worried about his comrades, and he suffered when they were lost. Brown, however, never lost a pilot from a flight he commanded.


During the German offensive of March 1918, Allied losses were very high. Brown was flying at least two missions a day and the strain of sustained combat was beginning to affect him. Col. Raymond Collishaw, Brown’s commanding officer, noted during an April visit that Brown looked exhausted; he had lost twenty five pounds, his hair was turning grey. Brown had also eaten contaminated rabbit that severely upset his gastro-intestinal tract. Life at Naval 9’s base at Bertangles was cheerless. “When they landed they had no diversions, no hot water, just tents in a muddy field. Yet against Collishaw’s suggestions, Brown refused to quit flying.

With the amalgamation of the RFC and the RNAS into the new Royal Air Force (RAF) at the start of April 1918 Brown’s Squadron was renamed 209 Squadron. He was appointed Captain under the new rank structure and the squadron was posted to the Somme area.

Flying an increasing number of high-tension missions each day, Brown scored kills on April 11th and 12th in the Somme region. This brought his tally to nine. His tenth and final success came some nine days later on the morning of April 21 1918: his victim was Baron Manfred Von Richthofen.